In common with virtually every automaker, Infiniti puts most of its resources into SUVs. Yet the Q50 compact luxury sedan (that arrived way back in 2014) still has something special going on.

The Infiniti is the classic front-engine/rear-drive layout with a choice of powerful engines that can appeal to virtually any enthusiast. Traction at all four wheels is standard for Canadian drivers. And naturally, the Q50 comes with many premium touches.

How much does the Infiniti Q50 cost?

With five trim levels to choose from, the Manufacturer’s Suggested Retail Price in Canadian dollars for the base 2023 Infiniti Q50 Pure trim starts at $45,195. Standard gear is generous, including safety features like Predictive Forward Collision Warning and Forward Emergency Braking. The AWD powertrain consists of a V6 gas engine mated to an automatic transmission.

What are the Q50’s power and fuel economy ratings?

The Pure, Luxe, and Signature trims of the Infiniti luxury sedan get a twin-turbocharged 3.0-litre six-cylinder gas engine developing 300 horsepower and 295 pound-feet of torque. That’s a considerable amount of muscle for what is the introductory engine.

The two Red Sport trims also use the same V6 but cook up 400 horsepower and 350 lb-ft. Both require premium gasoline, with the base engine scoring a 10.8 litres per 100 km combined city and highway fuel economy estimate, with the thirstier Red Sport needing 11.1.

With either engine, a seven-speed automatic transmission handles shifting duties. As mentioned, AWD is standard, but the system is based on a rear-wheel drive platform.

Illuminated USB ports (one type-A, one type-C) add a little technological sparkle to the Infiniti’s otherwise dated cabin. There are no real issues with the accommodations up front, though. Space is ample, the seats are comfortable, and other touch points are nicely padded.

It’s just that the design is showing its age. Take the dual screens in the center console, for example. They’re small relative to rival offerings, and the infotainment system isn’t as user-friendly as others.

At least leather seating surfaces are standard. The front seats are heated and eight-way power-adjustable. The steering wheel is heated as well. The rear legroom of 892 millimetres is average for the class. So is trunk space with up to 382 litres of space.

What are some of the Infiniti compact luxury sedan’s best features?

ENGINES: Most rivals have turbocharged four-cylinder engines for their entry-level trims. This is the Q50’s specialty, starting with a 300-horsepower turbocharged V6. Then Infiniti tops it off with a 400-horsepower Red Sport version. Good luck finding something German with the same muscle for similar money.

AWD STANDARD: A little snow must fall into each Canadian driver’s life. Unless they spend winters in Arizona, Southern California, or Florida, even in those mainly sunny places, traction at all four wheels can still be a great asset, if only to help efficiently apply engine power to the road. This is optional in every version of the 2023 Q50 luxury sedan.

While compact luxury sedan buyers are awash in choice, the Infiniti's dedicated rear-drive platform makes it relatively unique. Rivals include the BMW 3 Series, Genesis G70, and the Mercedes-Benz C-Class.

To help you decide which trim level is just right for you, here's a breakdown of the 2023 Infiniti Q50's prices, features, and equipment: 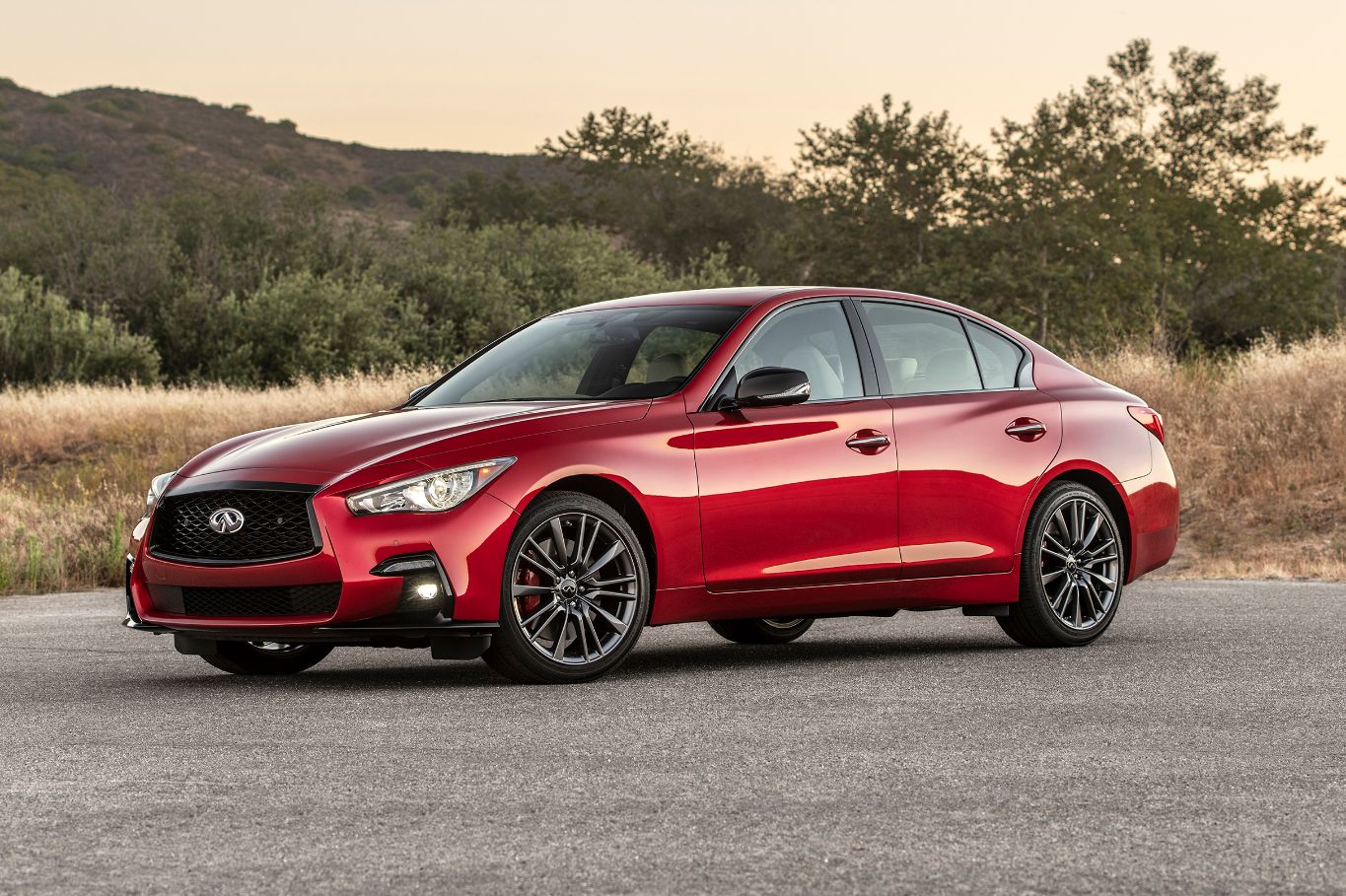 Adds to or replaces Pure features:

Adds to or replaces Luxe features: