The best-handling, best-equipped and most fun-to-drive Civic Si ever is coming to Honda dealers later this year.

The 5-passenger, front-wheel-drive Honda Civic isn’t simply a reliable, compact car. Some Civics are affordable, dependable, and designed to hold their value. There are also Civics with features you might associate with luxury cars. There are Civic sedans and roomy Civic hatchbacks. And there are high-performance Civics designed to raise your heartbeat between stoplights.

Two of them. The halo of the pair, the more expensive 2022 Civic Type R, will appear soon. Honda has released teaser photos hinting at a quick Type R based on the new generation Civic Hatchback.

But there is also a more affordable performance-oriented Civic: the Si.

The Civic Si has a rich history dating back to the early 1980s. While not quite the race-inspired Type R, Civic Si models have traditionally been quicker than the standard Civic but still readily equipped for commuting and family hauling duties. And the latest Si, based on the 2022 Civic Sedan, has just been revealed.

“The Civic Si has achieved iconic status because it continually offers exhilarating performance at an affordable price,” said Steve Hui, Assistant Vice President, Honda Canada. “The latest Si brings that along with a standard manual transmission that makes it even more exciting to drive. It’s clearly the best and most dynamic Si we’ve ever produced, and it’s built right here in Canada.” 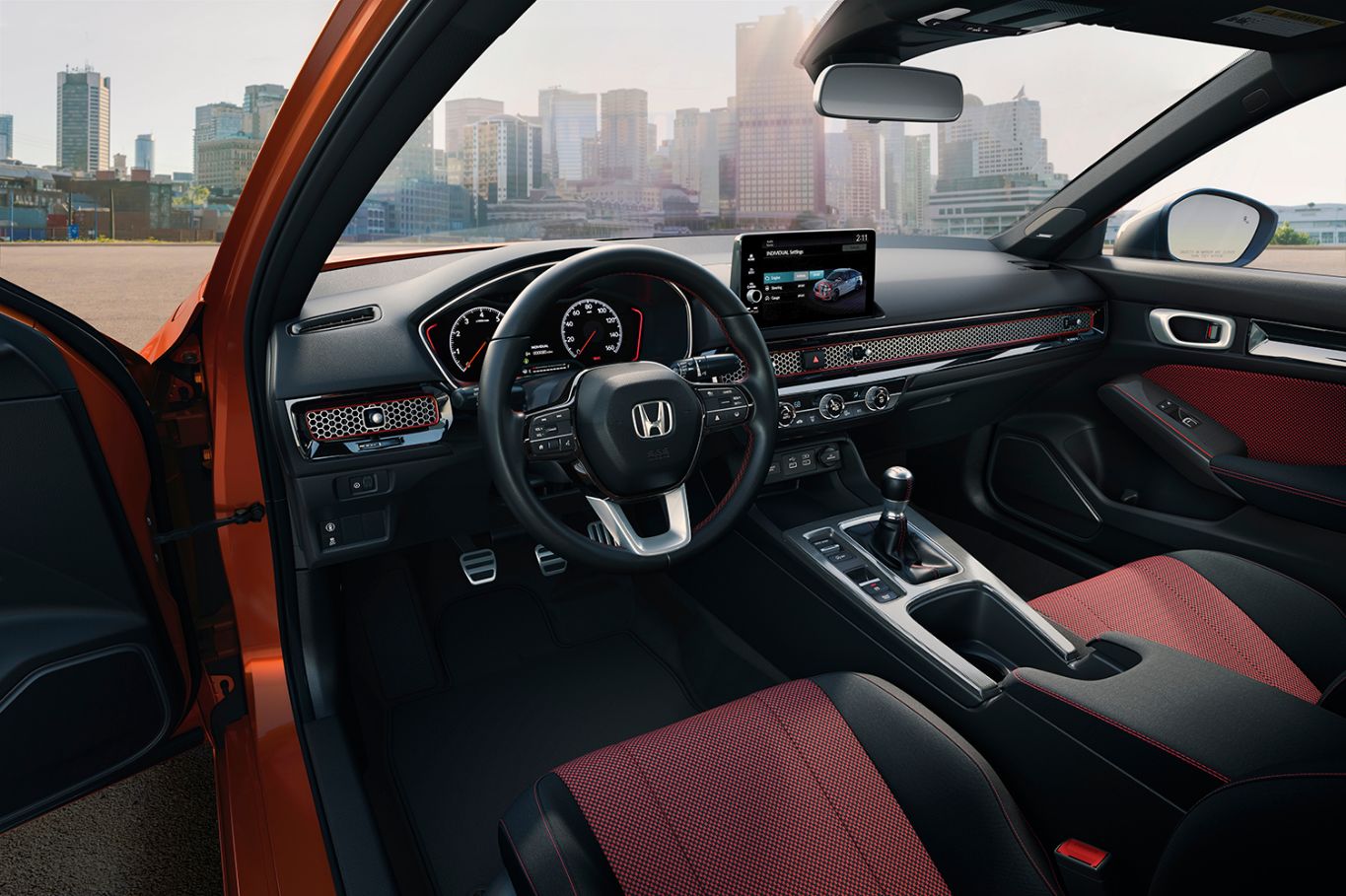 Compared to the more pedestrian Civic sedan models, the Si’s exterior changes are subtle. The Si gets the front fascia from the Civic Hatchback, grafted to the body of the Civic Sedan. It also sports an exclusive grille and badges, gloss-black side mirrors and window trim, and a subtle rear lip spoiler.

You might not want casual observers to know your Civic is something special. But you’d surely want it to feel unique once you climbed inside. Accordingly, the interior is not so understated. More heavily bolstered, Si-specific bucket seats are embossed with the Si logo. Red contrast stitching throughout the cabin adds to the sporty look. A red line across the dashboard and aluminum pedals do the same. This also is the first Civic Si with a large 9-inch HD colour touchscreen, wireless Apple CarPlay and Android Auto integration and a Bose Centerpoint 2 premium sound system.

Equipped exclusively with a manual transmission, the 2022 Honda Civic Si’s 6-speed gearbox has been updated for enthusiast drivers with an improved shift feel and 10% shorter throws. A new, more rigid shift lever mounting bracket and a new leather-wrapped aluminum shift knob similar to the Civic Type R’s contribute to the improved feel.

Since a driver's reaction to an engine's performance grows through several senses, Honda engineers have also retuned the exhaust note. "To complement the engine's natural exhaust note inside the cabin, the Civic Si uses an improved Active Sound Control system that can produce high-quality sound over a wider range of engine revolutions per minute (rpm)," Honda says.

Handling in the new Civic Si should be crisp and precise. A standard helical limited-slip differential, stiffened steering, and retuned suspension dampers get the credit for that. The rear suspension setup is shared with the upcoming Type R, and a 60% stiffer steering system torsion bar improves feel and response.

Under the Civic Si’s hood, you’ll find a 1.5-litre turbocharged 4-cylinder gas engine. It’s the same engine available on the Civic EX and Touring models. But engineers have returned it to make more of its power accessible at urban speeds. Output is technically down a bit from the last Si—200 horsepower instead of 205—but Honda says the power is more usable with output between its horsepower power peak at 6,000 rpm and its 6,500 rpm redline. The engine’s peak torque of 192 pound-feet at 1,800-5,000 rpm now arrives 300 rpm sooner for a quicker punch off the line and out of tight corners.

Considering the current supply shortages afflicting the entire industry, Honda says the new 2022 Civic Si is slated to go on sale in Canada later this fall.

Honda Canada hasn’t discussed pricing for the 2022 Civic Si yet. The standard 2022 Civic sedan starts at $24,465 in Canadian dollars and climbs to $30,265 in its most expensive, Touring trim. The Si will likely be priced slightly above the Touring, but below the $46,200 Type R.