If there’s an archetype for the mainstream mid-size SUV, it’s probably the Jeep Grand Cherokee. It’s the shape many see when they call to mind an image of a sport utility vehicle. Every redesign of the Grand Cherokee is a big moment for the automotive industry and for millions of buyers likely to put one in their parking spot.

Following the debut of its mid-size 3-row Grand Cherokee L sibling, and one size smaller than the 2022 Jeep Grand Wagoneer full-size SUV that also debuted this year, the next Grand Cherokee mid-size 2-row SUV is here. Replacing the current 4th-generation model that has been on sale since the 2011 model year, the Jeep SUV also says a lot about the future of cars. It’s more luxurious than any Grand Cherokee before it. It borrows tricks and features from higher-end luxury cars. It’s also available with an electrical plug above the driver’s side fender.

“Customers have come to depend on and enjoy their Grand Cherokee for four generations,” said Jim Morrison, Vice President, Jeep Brand North America. “We have taken their input into making the most-awarded SUV of all time even better for the 5th-generation.” 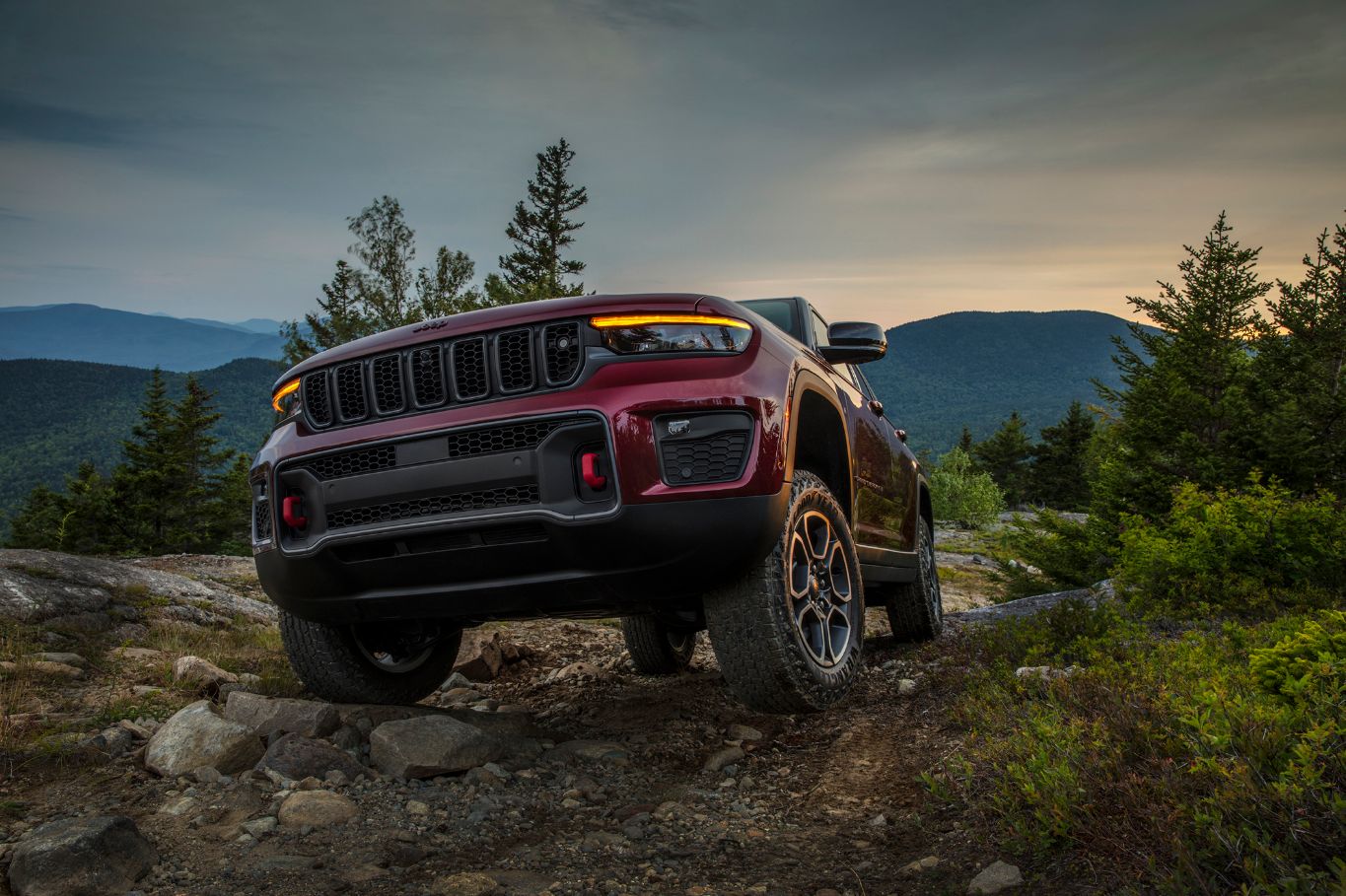 Like its new Grand Cherokee L sibling, the 2022 Jeep Grand Cherokee is built on an all-new architecture that Jeep says was “mission specific” for the new generation. It’s a purpose-built, flexible architecture engineered for both 3- and 2-rows of seats and the new 4xe plug-in gas-electric hybrid powertrain.

To see it, you’d know instantly that it’s the next Jeep Grand Cherokee. But the new 2022 model couldn’t be confused with the old one. The grille is just a few degrees off from vertical. But there’s just enough angle to the greenhouse to keep anyone from calling it boxy. The best-looking SUVs thread a needle between angular and curved in a way that makes them look muscular but agile. Jeep designers have done it perfectly. Black from the beltline up, it looks tailored and modern. Most of the photos Jeep has released so far show a matte black hood decal as well (it’s supposed to minimize glare), but that will be an option.

The interior of the 2022 Grand Cherokee borrows heavily from the more expensive full-size Wagoneer. The dash is built in three levels, with two upholstery colours broken by a cabin-wide wood trim panel. It looks upscale. The driver’s display is a customizable digital screen, and a central touchscreen ranges from 8.4 inches to 10.1, depending on trim level. Yet another screen, in front of the front passenger, is optional.

The new 4xe (say it “four-by-E”) plug-in hybrid powertrain, first seen in the Jeep Wrangler mid-size SUV, uses a 2.0-litre turbocharged 4-cylinder engine mated to a small electric motor. The combination produces 375 horsepower and 475 pound-feet of torque. Jeep says the Grand Cherokee 4xe versions can travel up to 40 kilometres on battery power alone before the gasoline engine kicks on and tow up to 6,000 pounds (2,720 kilograms). Depending on pricing, it may prove to be the most appealing version of the vehicle. A go-anywhere family SUV that can function as an electric car day-to-day but still claim unlimited range for road trips is hard to beat.

The 2022 Jeep Grand Cherokee’s overall value proposition remains the same. It’s still a mid-size 2-row/5-passenger SUV that can be both luxurious and capable. The standard engine remains Jeep’s 3.6-litre 6-cylinder. Here, it puts out 293 horsepower and 260 pound-feet of torque. A 5.7-litre V8 making 357 horsepower and 390 pound-feet of torque also returns. Both send power through an 8-speed automatic transmission. As well, there are several 4-wheel-drive systems available.