The Lexus RX is quietly one of Canada’s most popular and important new vehicles. It’s the best-selling model of Toyota’s luxury brand year after year and one of the top vehicles luxury car shoppers are most likely to consider. Its balance of serene driving experience and dependable resale value is just about right. Lexus shouldn’t change it much. But it is time to redesign it.

The current 2022 RX is based on a 2015 design. Drivers’ tastes have changed in the past eight years, with new technologies and more expensive gasoline altering the expectations of our cars. Can Lexus keep the virtues that make the RX the correct answer for so many buyers and update it enough to keep it relevant for another eight years?

Enter the 2023 Lexus RX, with new hybrid powertrains, cabin technology, and the same reputation for reliability that made the old RX conquer the mid-size luxury SUV segment. It goes on sale near the end of the year, and we expect to learn pricing closer to that time. (The current 2022 RX Manufacturer’s Suggested Retail Price starts at $57,500 in Canadian dollars.)

“The RX is not only our best-selling Lexus in Canada, but it’s also built right here too—at Toyota Motor Manufacturing Canada in southern Ontario—for the entire North American market. We’re proud of the role Canadians play in making this remarkable expression of Lexus craftsmanship and quality a reality,” said Martin Gilbert, Director of Lexus in Canada. 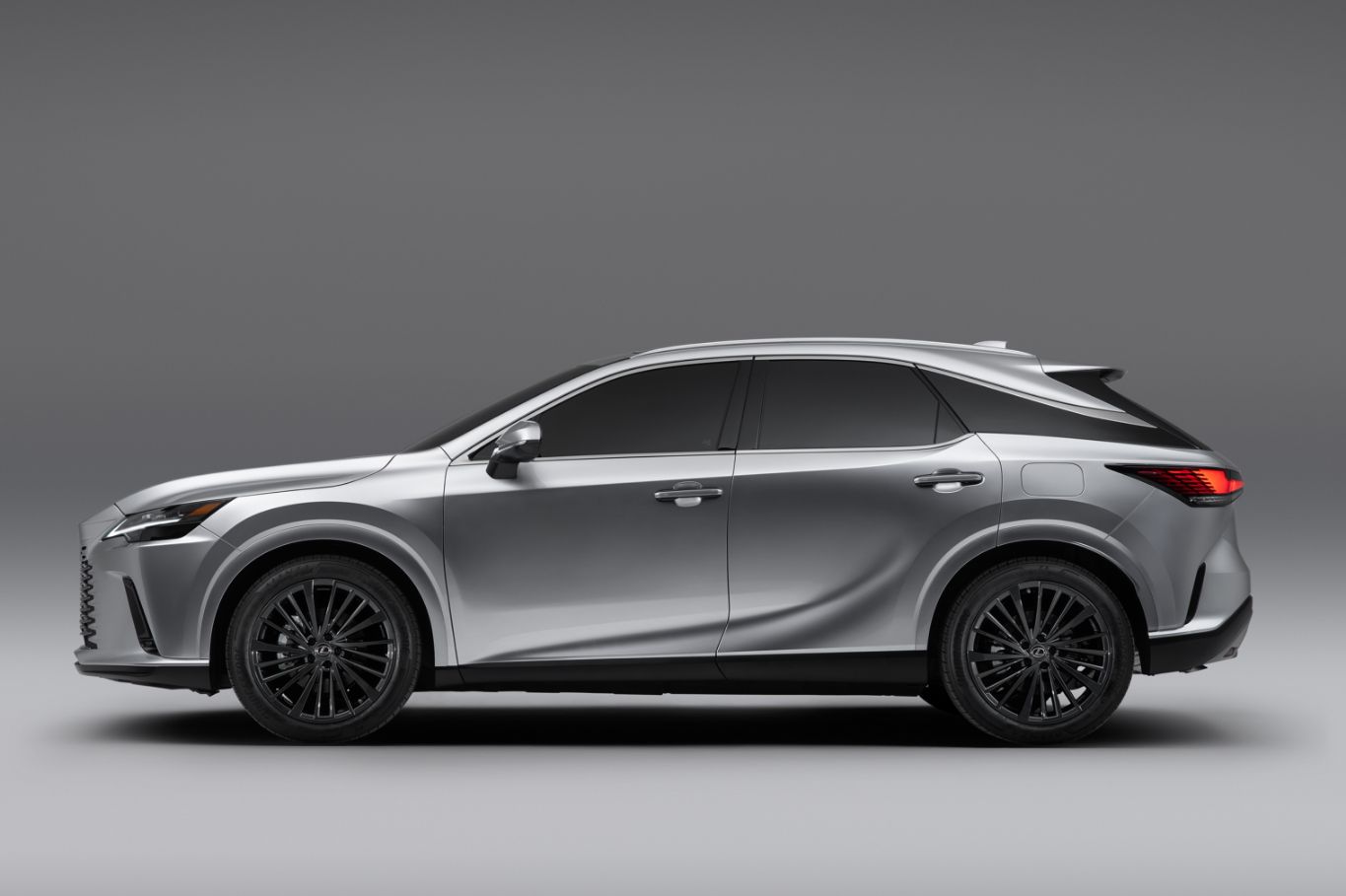 What’s the Exterior Styling of the New 2023 Lexus RX Like?

The mid-size 2023 RX shares a platform with the smaller Lexus NX and the Toyota RAV4. Those are less-expensive SUVs, which might have you wondering whether the new RX will feel as refined as it should. But Toyota has long made many vehicles out of a few platforms with great success. The new architecture is lighter than the old one, which might make the driving experience more responsive.

It also sits lower—so low that we might be tempted to call the RX a wagon or hatchback if automakers didn’t need to market most cars as SUVs these days.

The redesigned RX retains the curvy design theme the model is known for. But designers have updated the look with a sharper edge to the hood and a floating roof design thanks to a blacked-out C-pillar that reaches the rear lights. If you’re paying attention, you’ll notice that the trademark Lexus spindle grille is gone. It’s a huge black trapezoid here, with dimples in the painted sheet metal above suggesting the upper portion of the old hourglass.

For now, the all-wheel drive RX will be a 2-row/5-passenger vehicle. Lexus has no word on the future of the extended 3-row 2022 RX L model.

What’s Under the New RX’s Hood?

Across seven trim levels—Premium, Luxury, Ultra-Luxury, Executive, F SPORT 1, F SPORT 2 and F SPORT 3—buyers can choose from three powertrains, none of which feature the V6 gas engines that have been a staple of the Lexus RX lineup for so long.

Instead, the new engine in the base RX 350 is a turbocharged 2.4-litre 4-cylinder making 275 horsepower and 317 pound-feet of torque. It sends power through an 8-speed automatic transmission. Lexus estimates a city/highway combined estimate of 9.8 litres per 100 kilometres.

At the top of the lineup, a new RX 500h F Sport Performance edition appears with every trick in the Lexus bag. It combines the turbocharged 4-cylinder from the 350 with a pair of electric motors—one per axle—working through a sport-tuned 6-speed automatic transmission. That’s enough for 367 hp and 406 lb-ft while still managing 9.0 L/100 km in combined driving.

How Has the New Lexus Luxury SUV’s Interior Been Updated?

The interior is an entirely new look for Lexus. Rather than screens integrated into the dashboard's surface, the driver's instrument screen and available 14-inch central touchscreen visually hover over the dash. Ambient lighting behind the screens adds to the effect.

Of course, this being a Lexus, leather lines the seats and dashboard. But designers lined the door panels in a material that looks like wool, creating more visual depth than we're used to from Lexus products. It's a handsome look.

Like the all-new compact 2023 NX, the interior door latches aren't latched at all. What Lexus calls an "e-latch" opens the door at a touch—but engineers built a mechanical backup for emergencies.

Stay tuned for pricing information and our driving impressions of the all-new 2023 Lexus RX closer to its launch toward the end of this year.