As part of a broader strategy by parent Toyota to offer more battery electric vehicles (BEVs), the Japanese automaker’s Lexus luxury brand has unveiled its first BEV, the 2023 RZ 450e.

The new Lexus compact battery-electric SUV is just one of 30 Toyota and Lexus BEVs scheduled to sell globally by 2030, across all vehicle categories, including sedans, SUVs, commercial vehicles, and other segments.

As for Lexus, it says it aims for a “full lineup of BEVs in all vehicle segments” with BEVs accounting for 100% of vehicle sales in Canada. 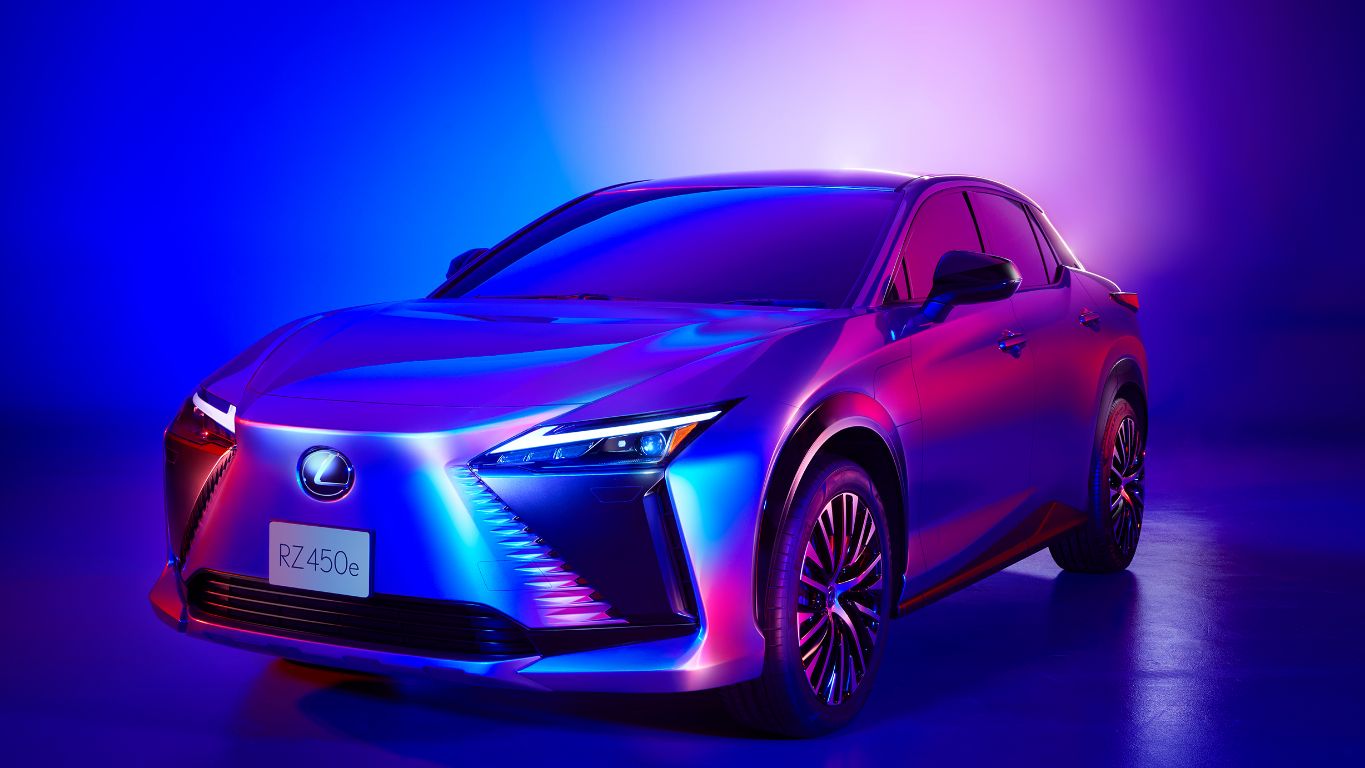 As the first Lexus BEV sold in Canada, the 2023 RZ 450e will be a compact SUV with a low-slung, sporty look and standard all-wheel-drive (AWD). It shares its underpinnings with the mainstream Toyota bZ4X and Subaru Solterra BEV twins. But the Lexus is a study of what designers can do to set two products apart.

Lexus provided imagery that shows that the company’s designers have outdone themselves. The RZ 450e looks far sportier and more elegant than the Toyota and Subaru versions.

BEVs don’t require grilles—there’s no engine under the hood to cool—but designers have worked the trademark Lexus spindle grille into this design as a clean, sleek front fascia. Character lines in the doors emphasize the RZ 450e’s curves, with an elegant split-S-curve near the beltline that looks exceptionally aerodynamic.

A floating roof terminates in a two-peaked roof spoiler. Steeply-angled liftgate glass sits above a second spoiler, with the Lexus name spelled out in a wide script underneath. A pair of (we assume false) vertical inlets mirror the sides of the spindle front grille on the rear hatch. The RZ 450e is a far sportier look than the bZ4X or the Solterra, even if what lies beneath is largely the same set of bones.

Lexus revealed few mechanical details about the 2023 Lexus RZ 450e. But based on what Lexus has announced, we can assume it will be very similar to the AWD versions of the bZ4X and Solterra.

The Lexus will be the first vehicle sold with a new electric motor Lexus calls Direct4, and it will use two of them. One mounted to the front axle and one to the rear. Lexus claims the system will shift “from front-wheel-drive to rear-wheel-drive and everything in between, in the blink of an eye.”

Lexus hasn’t, however, revealed power figures. The bZ4X, in its most potent form, makes 215 horsepower. That may work for a Toyota, but it would be a disappointing figure for a Lexus. The similarly-named 2022 Lexus RX 450h plug-in gas-electric hybrid makes 308 horsepower, which may provide clues.

The RZ 450e will also use steer-by-wire technology, which means there is no mechanical connection between the steering wheel and the front wheels. Just a digital feedback system Lexus says is more responsive.

Lexus is keeping much about the RZ 450e a mystery for now, including the dates when we’ll learn more.

The automaker also gave no hints about pricing for its first BEV. As a compact battery-electric SUV, the RZ 450e's most natural competition may be the Tesla Model Y which starts at $79,590 in Canadian dollars.