The EV9 isn’t quite Kia’s next electric vehicle, but it’s a strong hint of what is coming next.

Kia has unveiled a visionary 7-passenger all-electric SUV called the EV9 Concept. As a concept, it’s not a production vehicle headed to a Kia Canada dealership near you anytime soon. But it may preview one, as production versions of concept cars tend to be less radical than the showpieces but thematically similar.

Kia has promised a host of new electric vehicles (EVs) by the end of 2027. The first goes on sale early next year. It’s called the EV6, and it’s a bold step for Kia.

This one’s called the EV9, a hint that it’s something more than a design study. 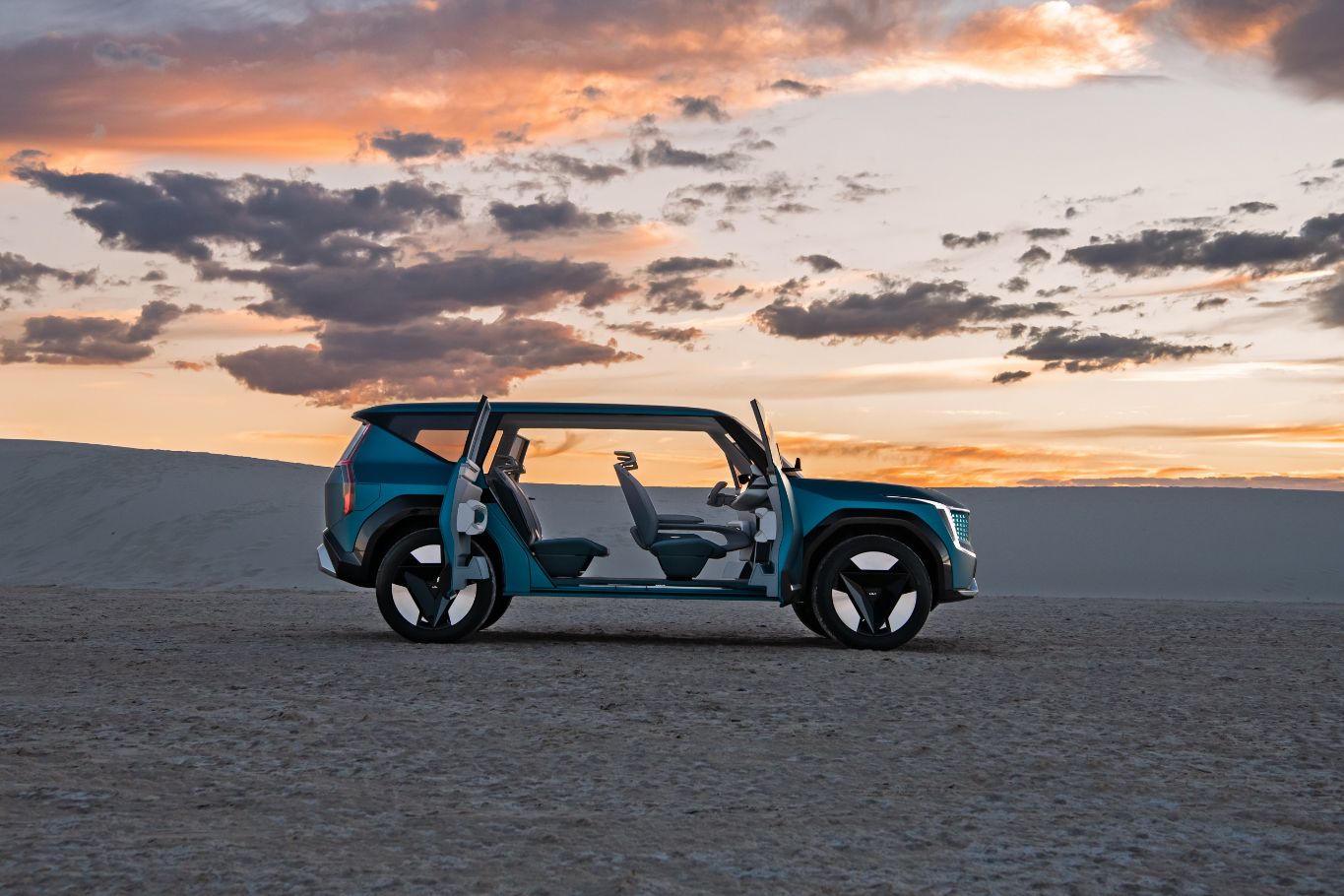 From the outside, the EV9 has bold, boxy lines. In silhouette, it’s almost a taffy-stretched version of the sub-compact Kia Soul—arguably the South Korean brand’s most recognizable vehicle. But angular body panels give it a hint of a video game car that hasn’t quite finished rendering.

The concept features no pillar between the front and rear doors, which open in reverse like a 1960s Lincoln Continental, allowing drivers to open almost the entire cabin to the outdoors.

And what a cabin it is. The 1st and 3rd-row seats pivot 180 degrees. The 2nd-row folds flat to form a table. So you could park your EV9 and turn it into a dining room or meeting space for four. The 3rd-row can face the rear—perfect for tailgating or watching a sunset.

When you tire of all that, and turn your lounge back into an SUV, the EV9’s cabin features an enormous 27-inch screen and the must-have accessory of 2021’s concept cars: an aircraft-style steering yoke instead of a wheel.

Kia hasn’t specified much about the mechanics of the EV9. It rides on the same flexible EV platform as the EV6. It’s a skateboard-like unit with most mechanical bits under a flat floor so that it can be scaled up or down to build vehicles of many sizes. Kia says the EV9 has a range of around 480 kilometres and can recharge 80% of its battery in under 30 minutes.

Will we see an EV9 with reversible seats and coach-style doors in Kia Canada dealership next year? Probably not. We're skeptical of some of the EV9's obvious show car show touches. But the central idea here is a Telluride-sized EV based on a platform the company already builds, with a silhouette like an updated version of its best-loved product.

The EV9's dimensions are pretty close to those of the Kia Telluride 3-row mid-size SUV. After that, it's all-new.

Do we expect to see an EV9 in Kia dealerships within a year or two? Probably. Just not as cool as the concept.

Pricing for the eventual production version of the EV9 is only a guesstimate. But based on its expected capabilities, plan on spending around 50% more than Kia’s current compact Niro EV that starts at $44,995 in Canadian dollars.