Which of these Chevrolet siblings checks off all the boxes in your hunt for a small SUV?

You know a segment is hot when an automaker offers more than one model. Witness the Chevrolet Trailblazer and Trax, both competing for buyers in the increasingly popular sub-compact SUV class.

The 5-passenger 2021 Chevrolet Trailblazer was just introduced for the 2021 model year as the General Motors brand’s second sub-compact SUV. Like its older Trax sibling, the Trailblazer slides in under the larger compact Chevrolet Equinox. With its small size and relatively affordable price tag, the Trailblazer is a good value for drivers looking for a deal on a versatile commuter. Some of its strong suits include a user-friendly infotainment system, excellent standard infotainment and safety tech features, and a pretty roomy interior for a sub-compact SUV.

Since 2013, the 5-passenger Trax has been Chevy’s entry into the sub-compact SUV fray. Like the Trailblazer, front-wheel-drive (FWD) is standard, while all-wheel-drive (AWD) is available. When fitted with AWD, the Trax could be suitable for a weekend excursion to the ski slopes or for negotiating a dirt road to a hiking trail. Instead, think of the Trax as well suited to the harsh terrain of poorly maintained Canadian roads. Petite dimensions mean ease of parking, the raised driving position results in good outward vision, while the interior space allows three close friends to ride along (four if they’re really close).

So which one to choose? Read on to find out which of these Chevrolet sub-compact SUV siblings is just right for you. 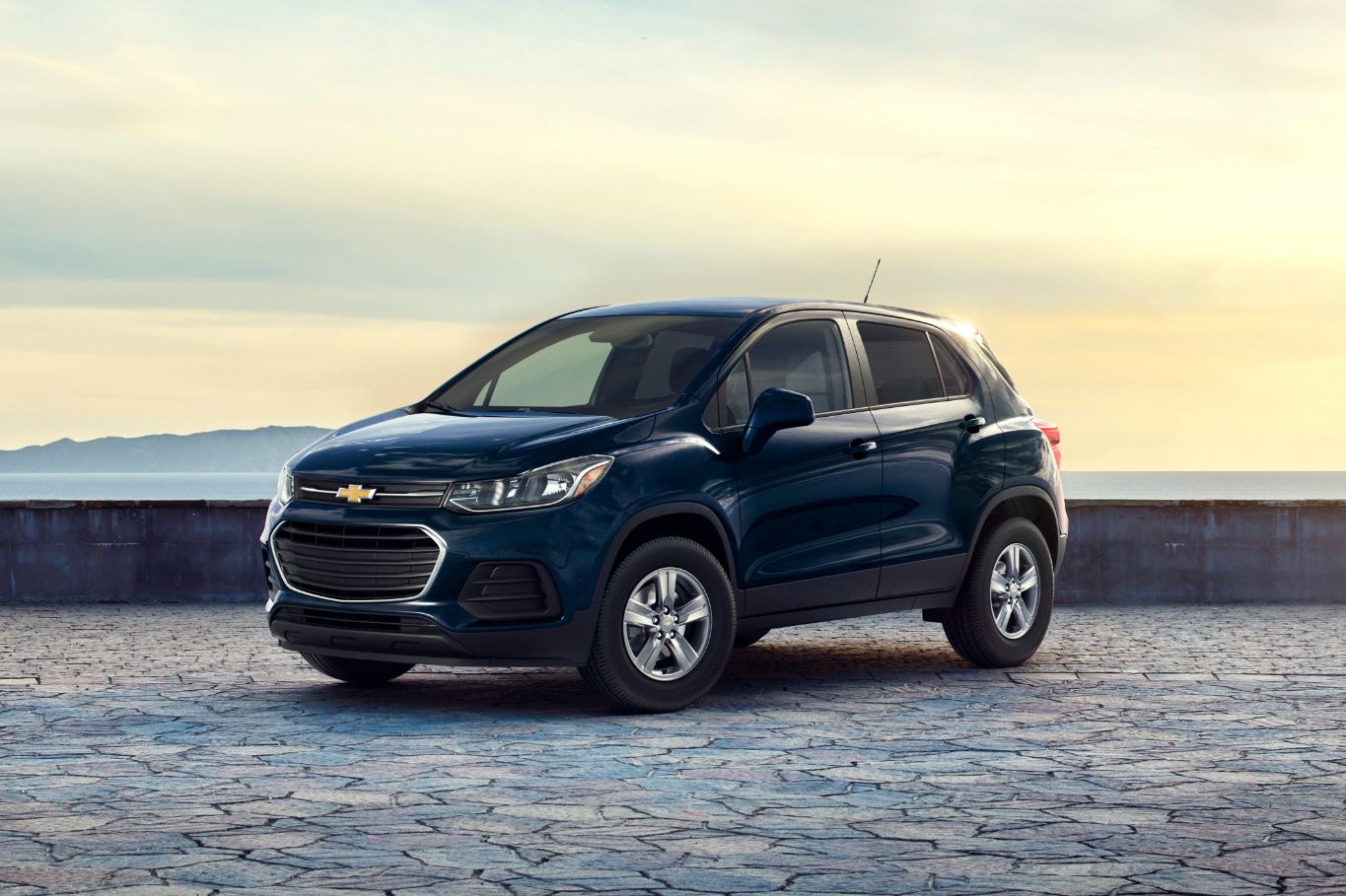 Across five trim levels, two turbocharged 3-cylinder engines, and either FWD or AWD, the 2021 Chevrolet Trailblazer sub-compact SUV is priced more like a compact car. Manufacturer Suggested Retail Prices (in Canadian dollars) start with the $24,098 base FWD LS trim that uses a 1.2-litre engine and a continuously variable automatic transmission. The $27,488 FWD LT gets the larger 1.3-litre engine. Traction at all four wheels starts with the $26,098 AWD LS, the 1.3 unit and a 9-speed automatic transmission. On top of the AWD LS, a pair of $30,798 trims (that mainly differ in styling) are the rugged-styled Activ and the sporty-styled RS.

There are fewer decisions to be made with only two trim levels and one powertrain when building out a 2021 Chevrolet Trax. The base FWD LS trim starts at $22,098. The higher FWD LT trim starts at $24,498. For $2,000, you can add AWD to either Trax trim level. 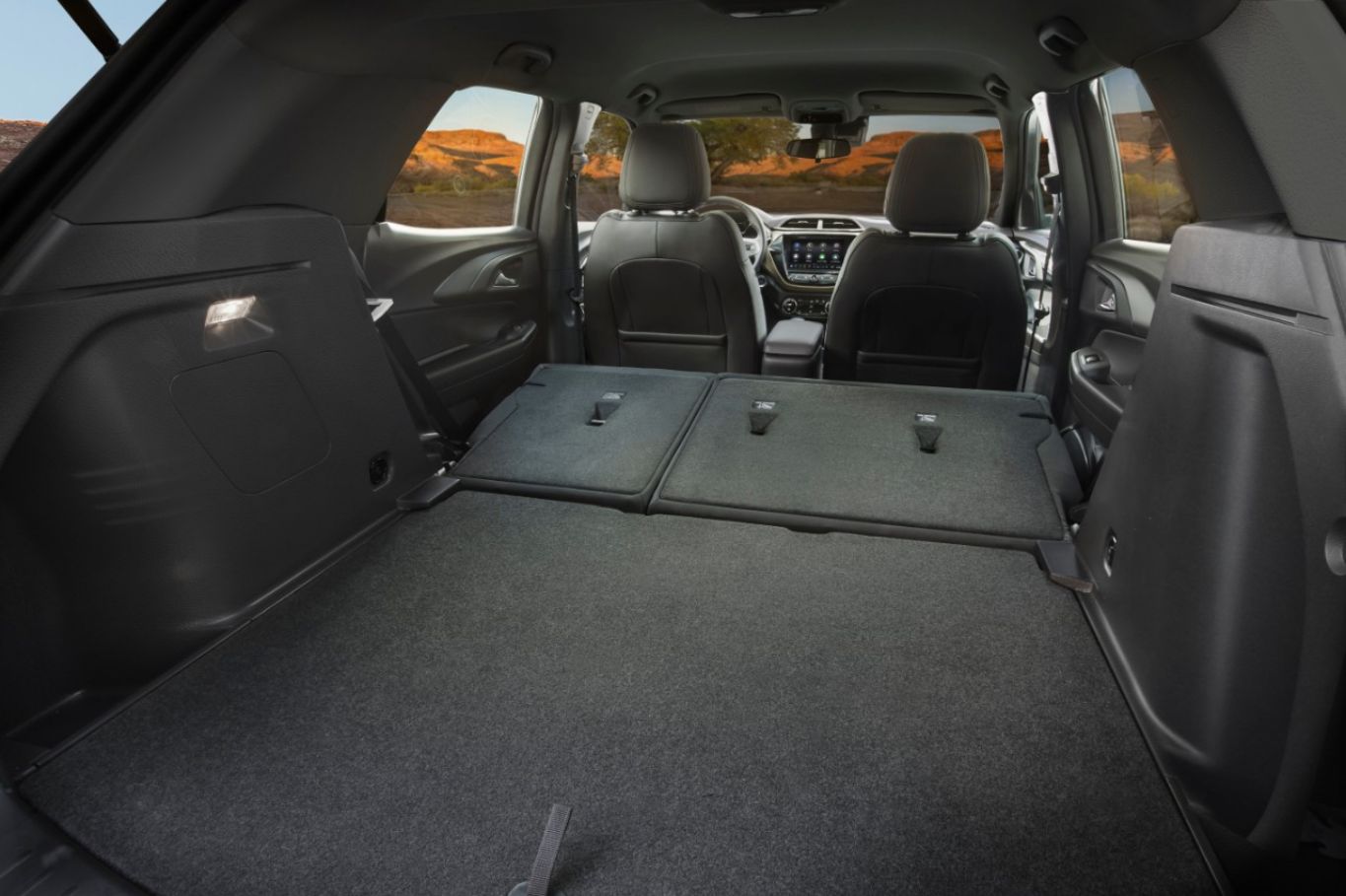 In its interior, the Trailblazer’s centre stack is simply designed but intuitively laid out. The front seats feel moderately comfortable. Compared to the smaller Trax, you’ll find more passenger space overall in the Trailblazer. The rear seats split 60/40 for cargo storage. Cargo room behind the rear seats clocks in at 716 litres—considerably more than the Trax’s 530-litre rating.

In the Trax, passenger space is OK upfront, but as you can probably guess from the Chevy SUV’s small footprint, rear passenger space is limited. If it’s just you and one other person and some gear, the cargo room is respectable. The Trax has a nifty feature in which the front passenger seat folds flat to accommodate longer items in the interior. Also, upfront, the Trax has a standard 7-inch touchscreen in the middle of the dash and simple dials to operate climate controls. 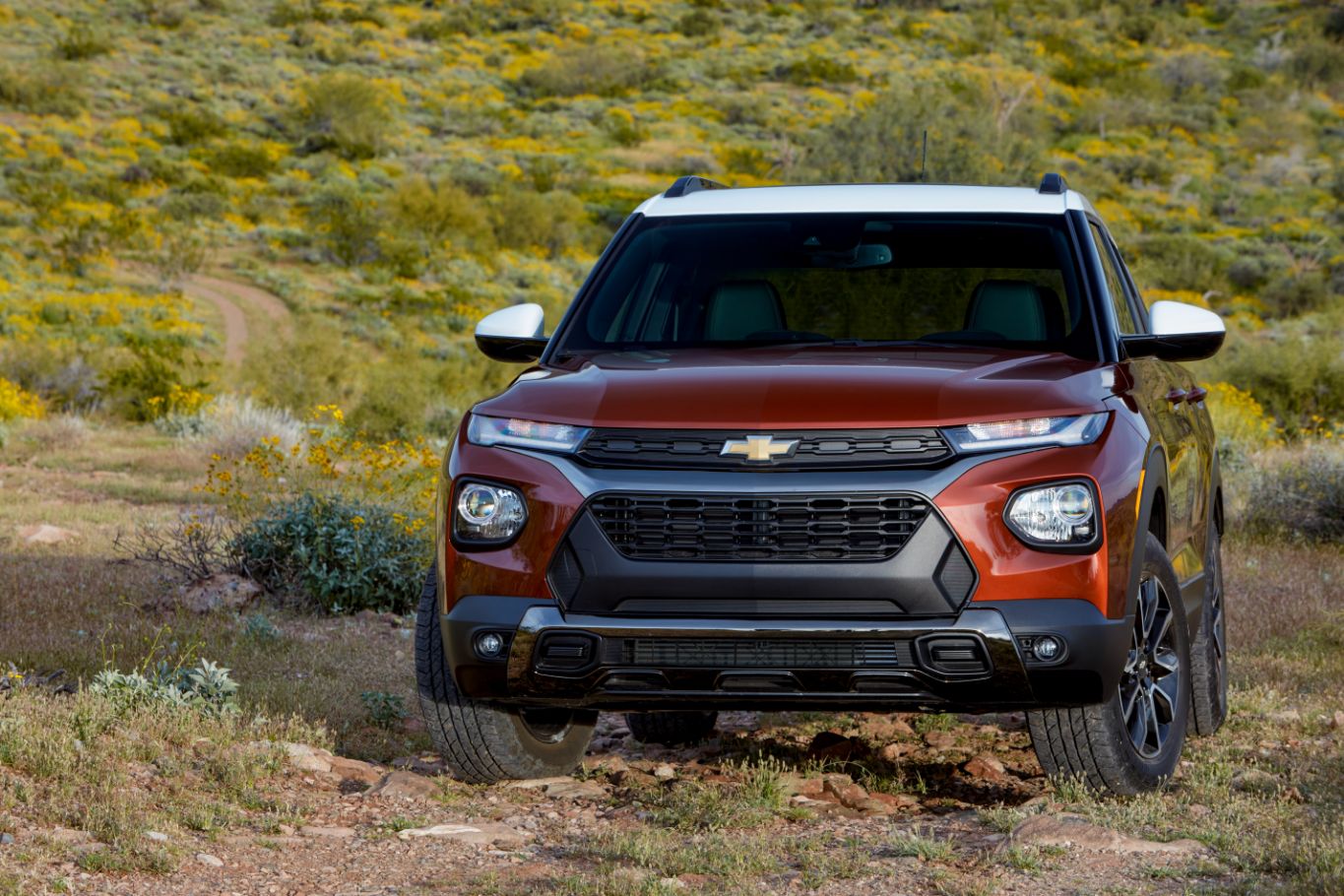 The Trailblazer’s base 1.2-litre turbocharged 3-cylinder engine makes 137 horsepower and 162 pound-feet of torque. With ether engine, FWD trims use a CVT that feels overly concerned with fuel efficiency. The 1.3-litre engine does its best to make up for the CVT, however, and its 155 horsepower and 174 pound-feet of torque offer up a spirited and peppy punch. The 9-speed automatic transmission that buyers get with optional AWD models does a much better job of milking the fun out of the larger engine.

The only powertrain available for the Trax is a 1.4-litre turbocharged 4-cylinder connected to a 6-speed automatic transmission. With 155 horsepower and 177 pound-feet of torque, it won’t be winning any races. And the Trax’s combined city and the highway fuel economy estimates of 8.4 litres per 100 kilometres (L/100 km) in FWD form and 9.1 in AWD trim can’t match the Trailblazer’s 8.0 L/100 km for FWD versions and 8.4 for AWD. 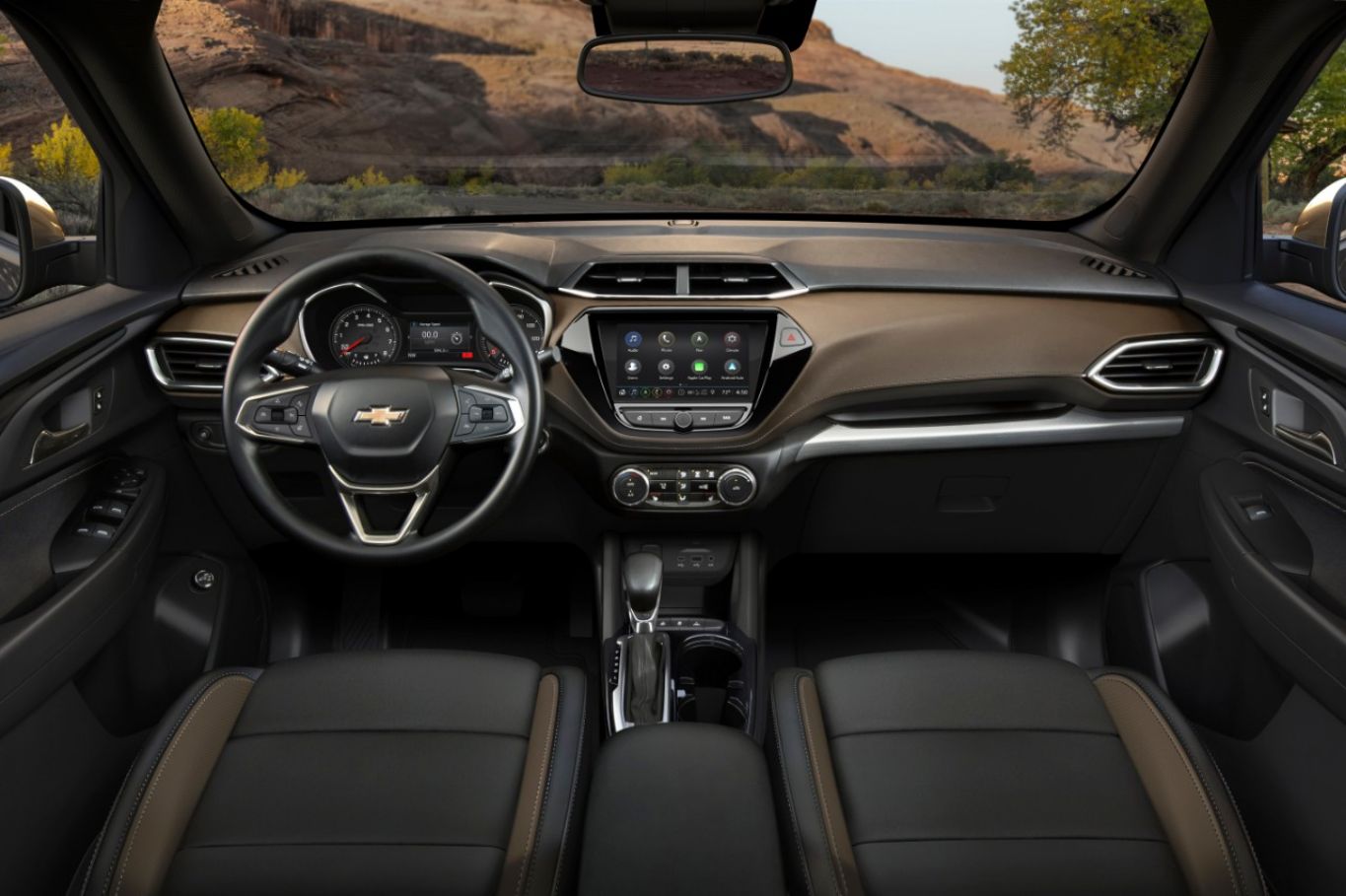 The Trailblazer’s ride quality does just fine in the comfort arena, but you can expect the requisite amount of body roll in an SUV of this pedigree. Add steering that’s effective, if a bit light and overly electronic feeling, and you’ve got a driving experience that more than adequately does what it’s supposed to do, meaning: get you places. Drive modes include Normal, Sport, and Snow. It’s the same system in both Chevrolet’s mid-size Blazer and Traverse SUVs, and it works well, especially if you’re looking for enhanced grip.

As an urban runabout with some brief highway commutes thrown in, the Trax is adequate. Highway stretches are also reminders that Chevy didn't go crazy with the sound insulation. While not the most modern or most efficient, the Trax's automatic transmission will appeal to drivers who don't want a CVT like that found in the FWD Trailblazer. However, if you regularly find yourself fighting for a parking spot or squeezing into a small garage, the Trax's diminutive size plays in its favour.

When it debuted several years ago, the 2021 Chevrolet Trax was a welcome and needed addition to Chevrolet’s SUV lineup. Its tidy size and value-oriented pricing still appeals to those on a budget who didn’t need a giant SUV. Still, if you’re dead set on the Trax, it does bring a standard turbocharged 4-cylinder engine and a conventional automatic transmission.

However, it’s hard not to go with the newer sibling of these two small Chevy SUVs.

The 2021 Chevy Trailblazer is slightly larger, has more interior space, comes with more choice in powertrains and trims, is quieter on the road, and will save you more at the fuel pumps. The new Trailblazer also offers features not even available in the Trax, including adaptive cruise control and an 8-inch touchscreen.