Find out which one of these Ford siblings is the best choice if you are shopping from the automaker’s Mustang stable.

Since its stunning debut in 1964, Ford’s ever-popular Mustang has been a single model lineup. Of course, there’s been countless special edition Mustangs and trims through its 57 years of existence. Yet the 2-door, 2+2 passenger, rear-wheel-drive sports coupe (or convertible) has never had a true sibling. But the Mustang’s only child syndrome was cured this year with the dramatic introduction of the all-electric, rear- or all-wheel-drive, 5-passenger, 4-door Mustang Mach-E hatchback.

Among traditional Mustang fans, the GT trim has always been the enthusiast’s choice. And the 2021 Mustang GT Fastback fulfills that legacy with its traditional 8-cylinders (in a “V,” of course), available manual gearbox, upgraded rear-wheel-drive (RWD) chassis, and a cockpit that caters to the driver first, front passenger second, and—finally—whoever wants to cram themselves into the tight pair of rear seats.

Ford will offer 40 new battery-electric vehicles (including pure EVs, hybrids, and plug-in hybrids) in the coming years. And the Mach-E is leading that charge. It rides on an all-new EV architecture where the lithium-ion battery cells ride beneath the floor in a skateboard-type design. More of a sport wagon/hatchback (especially in the sportiest GT Performance Edition trim) than an SUV, the Mach-E offers practicality and efficiency never provided in any previous Mustang.

So, which one to choose? Read on to find out which of these Mustang siblings is the better choice overall.

Like its gas-powered sibling, the various Mach-E trim levels are separated mainly by the EV’s performance numbers.

Pricing starts at $50,495 for the base, RWD Mach-E. The standard 68 kilowatt per hour (kWh) battery allows for an estimated driving range of 370 kilometres. The topline $82,995 Mach-E GT Performance Edition gets the larger 88 kWh Extended Battery and a pair of electric motors—front and back for standard all-wheel-drive (AWD)—and a longer 418-kilometre estimated driving range before needing to be plugged-in. Where an automatic transmission is optional on the Mustang GT, the Mach-E comes standard with a single gear automatic.

Note that with a base price north of $45,000, the electric Mustang doesn’t qualify for any Canadian federal government EV rebates, but does get provincial rebates in B.C. and Quebec, where owners can receive $3,000 and $8,000, respectively.

Whatever Mustang you pick, both come with a 3-year/60,000-kilometre comprehensive warranty.

For front occupants, the Ford Mustang GT Fastback is roomy enough, and most of the controls are easily reached. The optional digital dash reconfigures itself according to which drive mode is selected and is highly customizable. You sit closer to the road in the Mustang GT compared to its taller-riding Mach-E GT sibling, which results in rear three-quarter vision impeded by the wide pillars and sloping roof. As a 2-door, Mustang GT Fastback passengers entering the rear seats face more challenges than in the more accessible, 4-door electric-Mustang.

When sitting in the Mach-E GT Performance Edition, it looks sleek, comfortable, and provides loads of practicality. The big 15.5-inch infotainment screen dominates the dashboard, but the functions work very smoothly. The materials Ford uses inside the electric Mustang are more upscale than its gas-powered sibling. Rear passengers will be happy in the spacious and airy 3-passenger backseat. And that’s even more true with the panoramic fixed glass roof.

Except for front legroom, the Mach-E GT hatchback offers considerably more room for passengers and their gear than the Mustang GT Fastback. Trunk space is useful in the Fastback coupe at 383 litres. But that space pales in comparison to the 840 litres behind the Mach-E GT’s rear seats and the 1,691 litres when the rear seats are folded. 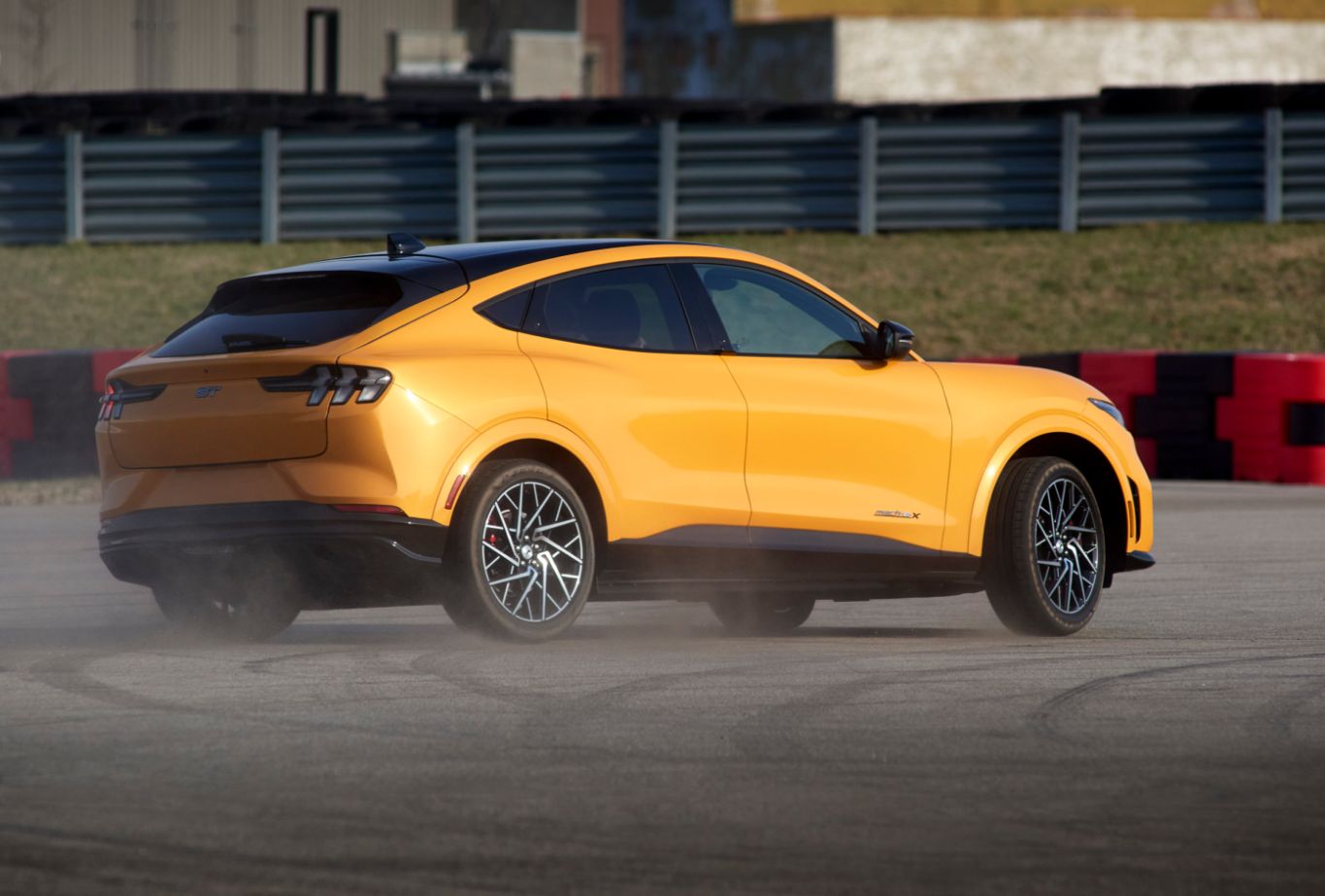 The performance versus fuel-economy equation has always been an inverse relationship with internal combustion engines. Typically, more performance leads to less fuel economy. Long-range all-electric vehicles, like the new electric Mustang, tend to turn that axiom upside down.

For starters, the 2021 Mustang GT Fastback’s 5.0-litre V8’s 460-horsepower and 420-pound-feet of torque numbers fall short of its electric GT sibling. Rated at 480 horsepower and 634 pound-feet of torque, the Mach E GT Performance Edition’s pair of 216-kiloWatt electric motors not only produce more juice, but with traction at all four wheels, Ford says 0 to 100 kilometres per hour takes only 3.7 seconds—0.5 seconds quicker than the Mustang Fastback GT’s manual gearbox time and 0.2 seconds quicker than the 10-speed auto box version that features Drag Strip mode (one of five driver-selectable modes) that has been designed to provide maximum acceleration.

The Mach-E GT is also more energy-efficient than its gasoline sibling. Where the combined city and highway fuel economy estimates for the Mustang Fastback GT come in at 12.8 litres per 100 kilometres with the automatic and 12.8 for the manual transmission, the Mach-E’s Extended Range AWD version (we don’t have GT numbers yet) is 2.6 Le/100-km (based on Natural Resources Canada’s Le gasoline per litre equivalent estimates, where 1 litre of gasoline contains the energy equivalent to 8.9 kWh of electricity.

One area where the gas Mustang beats its electric sibling is its overall driving range. According to Ford, the Mustang GT Fastback can be driven up to 386 kilometres (240 miles) in the city and up to 617 kilometres (387 miles) on the highway before it needs to be refilled. In contrast, the Mach E-GT’s maximum driving range before needing to be plugged in is only 418 kilometres.

Old School versus New School pretty much sums up the contrasting ways these two Mustangs feel from the driver's seat.

The Mustang Fastback GT's V8's rumble and roar are pure muscle car. The optional MagneRide adaptive suspension (part of the $4,500 GT Performance Package that includes upgraded wheels, brakes, suspension, engine cooling, Torsen differential, and other high-performance goodies) brings a best-of-both-worlds c capability of supple balance between ride quality and handling prowess. And although we are fans of the 6-speed manual transmission, the 10-speed automatic has a subtle way of keeping on song whichever engine it's connected to, so drivers can fully explore that beefy powerband.

That Mach-E GT Performance Edition gets the sophisticated MagneRide dampers as standard fare, along with 20-inch summer tires. While Whisper mode is best for commuting with a softer throttle pedal, lighter steering, and near-silence, Engage is an excellent middle ground and the mode we'd likely spend most of our time in. In the most involving Unbridled mode, the steering gets slightly heavier, the throttle sharpens, and the Mach-E launches hard from a stop with a growling soundtrack that matches the experience.

Although both Fords come from the Mustang family, their opposite executions mean that both do well in their respective missions.

If you want the most performance value, a manual gearbox, need only room for the occasional pair of rear seat passengers, and appreciate a great handling sports car that can also be comfortable as a daily-drive—regardless of its fuel economy—the 2021 Ford Mustang GT Fastback is hard not to recommend.

And, if you want a very quick-yet-roomy 5-passenger hatchback with an upscale interior that does not burn any fuel at all, the 2021 Ford Mustang Mach-E GT is worthy of your consideration.

While many drivers know how to handle a fill-up at a gas station, here are the dos and don’ts of publicly charging your electric car.